skip to main | skip to sidebar

The years just flowed by like a broken down dam...

...in the immortal words of John Prine, sung so poignantly by Bonnie Raitt, and from one of my all time favorite songs - "Angel from Montgomery." I can't believe so much time has passed, but it is all good. I have been flying solo for nearly three years now, and my focus in that time has been rebuilding and moving forward in all areas of my life, and I honestly believe I am better than I have ever been. Who would have thought I would just be hitting my stride in my fifties? 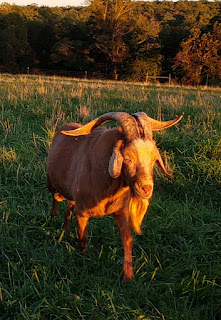 This year, I have dedicated myself to rebuilding a registered Kiko herd. I still have some of my original genetics, thankfully, the toughest and most hardy, and I am working to register the does as they produce kids by my new registered buck. I still have my ECR Southwest Shaw son and am registering him. We just call him Red. Red is an older gentleman now, and his mother, SDR Paula Bear (a Loverboy granddaughter), just passed away this winter. Red is a tough old guy. He broke something in his fetlock years ago, but he never let it slow him down. Many of my current does are his daughters. This is a picture of him from September of 2020.

I purchased a new outcross buck over the summer of 2021, and his first kids have just been hitting the ground. Virginia wanted to name him Napoleon Dynamite, but I steered her towards just plain Napoleon, as I thought he might need a slightly more dignified moniker as he grows to maturity. I picked him out sight unseen, from only a baby picture and pedigree page. He has an old goat of mine in his lineage, and I liked his frame. I thought he would be a solid outcross to what I have left on the farm and I hope his frame indicates what he's going to be as a mature buck. Here is a particularly bad photo of him in the weeds. So far, so good with him. He is hardy and he Famachas well. I will be interested to see how the kids do and plan to keep his doelings if all goes well. 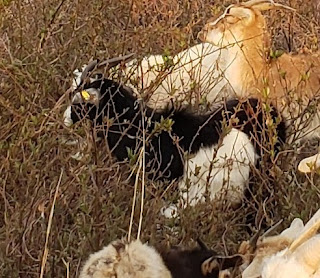 As fortune would have it, the first of his kids to be born were out of a doe by Red and out of a GHK doe by Wild Bill (Terminator lines). My goal had been to bring together multiple strands of Terminator for parasite tolerance and resistance, and this doe is full sister to the young buck I plan to use as a breed back buck to some of Napoleon's daughters in the future. The GHK doe was a Rusty Rita daughter, and died when this buckling and his twin were about a month old. He became Oliver Twist and she because Little Orphan Annie. Annalee is still disgusted that I named them that, but it was the natural choice and we've had so many goats now that sometimes we must take the path of least resistance. These names are at least slightly more creative than some of the others. Case in point are our goats Polite Goat, Talkative Goat, and Crazy Goat.

The second set of Napoleon kids are out of a goat that Virginia named back during her Thomas the Tank Engine phase, and I had not realized was about ten years old. I was looking back through my old blog entries and had posted pictures of Thomas as a yearling. She's the grand old dame of the farm now and pretty much runs the place, just as did her dear old mother, Marshmallow. Marshmallow was our first registered Kiko doe - purchased from BBM Farms when they dispersed their herd. She was a tremendous doe and was productive into her teens. It looks like Thomas will follow in her mother's footsteps. Thomas' sire was our solid black buck, BBM Nick's X232. Her twin daughters reflect that color history. I certainly hope these doelings grow well and ensure these longevity laden lines remain well represented in my herd. 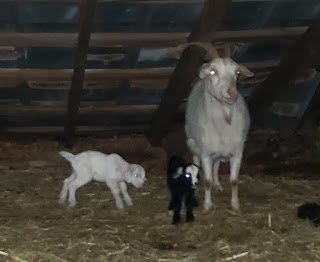 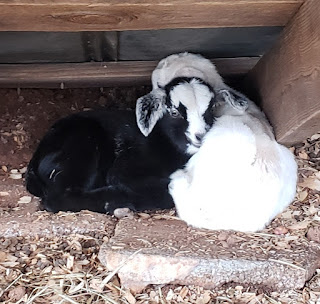 My goal here remains the same. Anything I've learned along the way, I hope to share. I have had several people ask me for advice or assistance over the past few years, and I hope I have been able to help. My particular niche is raising Kikos on small acreage in a challenging climate. You name the parasite - we have it 'round here. You name the invasive plant species - we probably have that, too. There have been so many things I have learned over the years that I hope can help other producers. The first thing I want to mention has had some recent publicity. I have been using copper wire particles in bolus form for many years with good results, but I gave up on feeding them whole many years ago. I had been pouring them out in a handful of feed and trying to direct my hand at the target goat in the crowd and stuff the contents into the mouth of said goat before the rest of the herd could maul us both. You know what? It works. If you have high iron soil, you are doubly challenged by copper deficiency because iron binds many other essential minerals so they are not effectively absorbed. Northern Stokes County is known for its deep red high iron clay soil. It leaves a stain that is pretty much impossible to get out of white clothing, and the iron in the well water eats traditional pipes. It also allows me to use copper wire particles in addition to a high copper cattle formula mineral, but I will discuss the minerals I've found locally available in my next installment. I am looking forward to talking to you soon!

Posted by generationfarm at 4:24 PM

generationfarm
We are raising Kiko goats in the Piedmont of NC.